Women, write your own rules 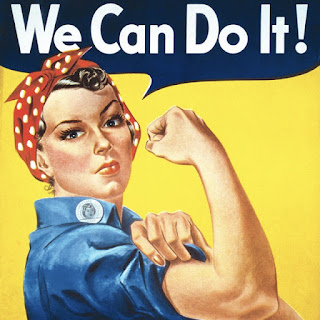 Repeat after me: you don’t have to follow other people’s rules.

According to the world, there are immense list of ‘rules’ for being a woman. We’re all expected to pour time and effort into meeting certain beauty standards so we’re suitably aesthetic for those around us. We’re expected to magically figure out what side of the work/family balance our neighbors expect us to be on, which can change depending on who you talk to at any given moment. Worse, we’re expected to keep that balance effortlessly, without any regard to the fact that we have only so many hours in a day and could really use a little help.

No matter how much we do, how much we give, the ‘rules’ are always asking more of women. We’re expected to be good, kind and gracious at all times, keep clean homes, make sure our kids have enough extracurricular activities, be nice to the neighbors, be involved in our communities and church groups and always stay skinny and so on and so on and so on….

Those are the world’s rules, not yours. And honestly, the world doesn’t know anything about you, and what you have to go through in a given day, and anyone who hasn’t been in your shoes really doesn’t have a right to decide whether you’re doing things “correctly” or not. Some days, the fact that you’re doing anything at all is enough of a reason to stand up and applaud yourself.

You don’t have to live up to anyone else’s standards but your own. You’re the one who’s doing the job of living your life, which means you know better than anyone else what it takes to live it right. The world won’t give anything back to your for jumping through its hoops, so there’s really no reason to kill yourself trying to pull the trick off. No matter how loud they’re shouting at you, there’s nothing that says you have to go where they tell you to.

I’m not saying that there aren’t things we do have to do, both as women and people in general. We all have responsibilities, no matter what gender we are, and fulfilling those responsibilities is what keeps the world moving. Whether it’s going to your job, calling your mom, eating slightly healthier than you did yesterday, or making sure your kids get fed and go to sleep at a reasonable hour, we’ve all got a to-do list that sometimes feels like it’s five miles long.

But don’t let other people put things on the list that you don’t want to have on there. The church potluck will survive without you bringing anything, and if you feel guilty about not contributing something a bag of store-bought salad is just fine. If your kids have to make their own dinner for a few nights, the world won’t end. Neither will your husband, even though he might complain like he will. You don’t always have to be the one who stays and works those extra overtime hours at your job. You don’t have to dress the same way everyone else does.

You get to decide what it means to be a good woman, and the only test that really matters is how you feel about yourself at the end of the day.
Posted by Jenniffer Wardell at 2:29 PM

Email ThisBlogThis!Share to TwitterShare to FacebookShare to Pinterest
Labels: about me, girl power, growing up, relationships, rules, speaking out, women