Don't get fooled by Photoshop

There’s no diet in the world that will make you look like the models you see online and in magazines. The models themselves don’t even look like that.

See, there’s this little thing called Photoshop.  And it turns out that, no matter how skinny a model or actress is in real life, the people who run the magazine or website want them to be even skinner. For their skin to be even clearer and their breasts to be even bigger. Wrinkles? They don’t exist in Photoshop land – a quick brush with the blur tool and they’re gone forever.

Sometimes, you don’t even need the “before” picture to tell. Those shots where the skin on their face looks so smooth and tight you could bounce a quarter off it? That’s not a magic skin crème – it’s someone in the art department who went a little too crazy on the computer. Not even Scarlett Johansson has that kind of face in real life, and if she can’t manage it that officially proves that it’s impossible to pull off.

Besides, would we really want to? It kind of makes them look like aliens from another planet.
If someone ever invents a Photoshop that works on real life, they will immediately earn a gazillion dollars and legions of people would happily bow down to them as their new overlords. A quick swipe with the erase tool, a couple of taps on the “bright” slide bar, a little judicious stamping, and we could all look like those poor half-naked women draped over the couches in all those high fashion ads.

But right now, in a world where that kind of miracle technology doesn’t exist, we have to stop looking at those fantasy images and thinking that they’re something we need to work towards. That we need to be as skinny as those models we see in advertisements. That our chests need to be as round and as perky. That we can age in such a way where wrinkles don’t exist.

Those things are just as unreal as the idea of waking up in the morning with wings growing out of your back.

Think of those glowing, alien pictures of non-existent women in the same way you do paintings of nubile warrior women or ridiculously sexy space babes who were always inexplicably attracted to the hero. You’d never think you had to actually be one of those women, would you? If nothing else, those metal bras always looked incredibly uncomfortable.

Remind yourself of that, every time you start looking longingly at a Photoshopped waistline. Tell your sisters, friends, daughters and granddaughters, and repeat it until you see it start to sink in. Trying to twist, tighten or shove your body into a shape that doesn’t actually exist in nature can only bring you pain. At best, it leads to heartache and constant frustration. At worst, it leads to eating disorders and the kind of self-hatred that can screw up entire lives.

Exercise so you feel healthy and strong. Use that skin crème because you love the way it makes your skin feel silky soft. Change your diet because you want to wake up with more energy in the morning.

Whatever you choose to do, you’re showing the world how awesome, beautiful and powerful real women can be. In the end, that’s so much more amazing than any magic Photoshop can pull off.
Posted by Jenniffer Wardell at 7:33 PM No comments: 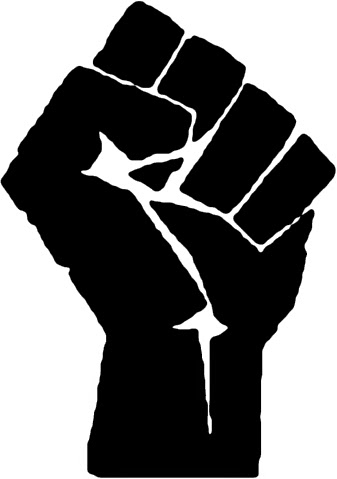 Saying that someone “fights like a girl” is a pervasive enough insult that even we women have been known to use it sometimes. Everyone knows the unspoken images behind the words – a useless slap instead of a solid punch, ridiculous angles and no follow through. In popular culture, to fight like a “girl” means you’re no good at it.

But have you actually seen women fight?

I’m not talking about female boxers and MMA fighters, though those women are awesome and terrifying in their own way. I’m talking about the struggles an average women goes through in her life, and the challenges she’s able to take on without breaking a sweat.

Our bodies are wonders of strength and design, able to accommodate an entire other person growing inside of us without breaking or becoming permanently mangled. We’re such great survivors that our bodies know how to not only keep one person alive for months, but two. And we can do it again and again.

It’s not just childbirth that shows how tough a woman’s body is. Studies have shown that women overcome brain trauma faster than men, taking less time to heal from concussions and other injuries. We outlive men by an average of about five years, at least in the United States, and are less likely to be obese adults as well.

Inevitably, there are a few areas where men have the edge over us. National statistics show that we’re at a higher risk of developing strokes, and more women suffer from osteoporosis than men. Heart attacks are more of a concern for women than many of us realize or like to acknowledge. There’s also breast cancer, the most common cancer in women and second to lung cancer as a leading cause of death for women.

But real fighters know that just because you’re down doesn’t mean you have to be out. The fact that breast cancer is so common, but still isn’t our leading killer, is proof that it’s possible to fight back against even the worst illnesses. Breast cancer survivors are some of the strongest, bravest women I’ve ever met, banding together to support each other and pushing a major outreach to make sure other women get tested. Even if they’ve been hit by the disease, they don’t want to see other women fall.

We can combat other illnesses as well. Research shows that potassium lowers the risk of strokes in older women. Knowing the warning signs of heart attacks for women – which are different than they are for men – and pushing for early detection can lower our risk for that as well. Making sure your calcium intake is high enough can help you avoid having to deal with osteoporosis later in life. Screenings of all kinds are important.

Sure, men may be physically stronger than you are. But strength is only one factor that matters when surviving a physical fight, and when it comes to the battles life throws at us it’s often the least important one. The ability to survive, to take care of yourself and others, and to heal and move on can be far more important. And we women excel at all of that.

So the next time you hear the phrase “fight like a girl,” tell the person that they’re using it inaccurately. Because girls are some of the best fighters I know.
Posted by Jenniffer Wardell at 1:03 PM No comments: