Down but not out

We all backslide sometimes.

No matter what goal we've set for ourselves, there will be times when we trip and fall flat on our faces on the way to achieving it. It's not the same thing as not trying – we all know when we're only pretending, and when we give it up it's almost a relief. Most goals never make it past wishful thinking, or conversations with friends or co-workers.

It's when we're actually trying that it really hurts. You have to have covered some ground before backsliding becomes noticeable, fighting your way through that first hump of "why did I say I'd exercise every single morning" or "I'm still counting the hours since my last donut." It usually hits when you've finally gotten into the swing of things, when that early frustration and despair over what you're  denying yourself has faded into something almost like hope. When you find yourself starting to think that, somehow, you might actually be able to do this.

But then something happens.  The day gets so busy that suddenly you're going to bed and you realize that you missed your exercise routine for the day. We swear to ourselves we're going to stop smoking, but then work turns into a nightmare and we get so stressed out there's suddenly a cigarette in our hand. We're at a party surrounded by all the fats and sugars we were so careful avoiding, and our self-control finally snaps like a twig. Between one breath and the next, it feels like we've undone every bit of the progress we've made.

Here's where it gets tricky. Maybe the reason is because you feel guilty that you've stumbled, and the thing that you usually use to comfort yourself is probably the thing you're trying so hard to stay away from in the first place. Or maybe the guilt turns into a shame spiral, and you decide suddenly that you were a fool for setting whatever goal you were trying for. You tell yourself you were a fool for ever trying it, that all your hard work has just gone down the drain, and there's nothing left for you but to give up on all of it.

The bravest thing you can do in these moments is ignore all of that and keep going. Yes, you screwed up, but the truth is that you're probably going to screw up several more times before you make it anywhere close to your goal. Even the best baseball players don't hit the ball every time they're up to bat, and even the best actors and actresses in the world will occasionally go out of their way to make a really, really terrible movie (I'm looking at you, Hugh Jackman). Everyone fails.

But you can't let that stop you. It's not the fall that everyone will remember, it's what you do next – you could lay down on the ground and bemoan your fate, or you could get back up again and keep charging forward. If you get knocked down – even if it's by yourself – don't stay down.


In the end, that's all success really means.
Posted by Jenniffer Wardell at 8:45 PM No comments:

In honor of my birthday today, here's the cover for the new e-book I'm going to release this summer, "Two Left Feet." It's a twist on "The Twelve Dancing Princesses," except our poor heroine can't actually dance at all (and get dragged along by her sisters anyway). Still, she's a clever girl, and manages to find plenty to do anyway.

Barring some sort of hilarious cosmic disaster, I plan on having it available on a variety of different platforms by Aug. 1. 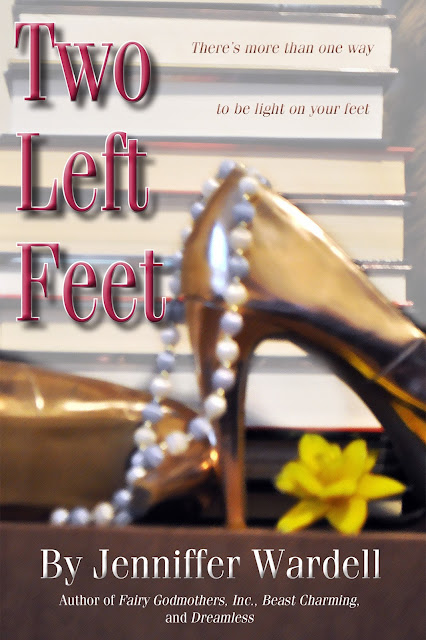 Posted by Jenniffer Wardell at 11:08 AM No comments: