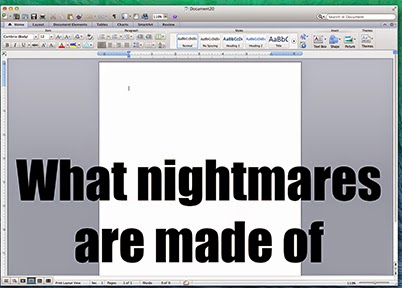 Writing is hard. There are millions of books, essays, blog posts, letters, diary entries and online rants going into detail about how hard it is. We’re creating worlds here, taking little squiggles of ink and pixels and making them into entire living, breathing worlds, and it takes all of our blood, sweat and tears to make it happen. We’ve got to wrestle with characterization, dialogue, plotting, timing, interpersonal relationships, symbolism and any number of things that Literature teachers spend years talking about.
The biggest challenge, though, is getting started in the first place.
I’m a journalist by trade, and if you talk to any one of us long enough you’ll find out that most of us have a novel we’ve always meant to write. The same is true of Tumblr and online message boards, where fans come up with a whole host of fanfiction plots that they swear they’ll write or keep hoping someone will write for them.  Each and every one of them can always tell you the plot of their unwritten novel or story in exquisite detail, having spent hours, days or even years of their free time working it all out in their heads. They’re outlines even the most planning-obsessed writer would kill for.
And the tragedy of it all is that most of these stories will never be able to be read, because none of these people ever seem to write them down.
Getting that first sentence out of your head and onto the paper can be unspeakably terrifying. You’ve dragged your fantasy out into reality, and every insecurity and doubt you’ve ever had comes right along with it. The sentence sits there, lifeless, completely without the crackle and sparkle the story has in your dreams, and you want nothing more than to delete it immediately.
But don’t. Go on to the second sentence instead, then the third, fourth and even the fifth. Rip the scene out of you word by word and lay it down on the page. Let the characters you’ve come to know so well laugh and scream and trip all over the page. It doesn’t matter if it’s the first scene of your story. It doesn’t even matter if it’s any good. What matters is that it’s there, it’s real and you can touch it.
If you do this for long enough, you might get lucky and the words will start pouring out of you on their own. If that happens let it all pour out of you, not worrying if you’ve gotten a description wrong or part of the dialogue is terrible or you don’t know what’s going to happen in the next few minutes. All that matters right now is getting the words out of you and on to that page.
Later, you can go back and slap it all into shape. Even the most experienced writers rewrite and edit their work dozens of times, throwing away whole scenes and changing characters and redoing the ending when the first one didn’t work.

In the novel I just finished writing, I literally stumbled my way through an entire third act plot twist because I knew I needed to get from point A to point B but I had no clue how to get there. Later, when it was done and I could see the entire story arc laid out in front of me, I went back and rewrote that whole section exactly the way it should have been.

The truth is, no one’s first draft is very good. But if you never write that first draft, you’ll never get to the second (and the third, fourth, fifth, etc.). And, more importantly, you’ll never get to that moment when someone reads your story and tells you how grateful they are that it was out in the world for them to find.
Posted by Jenniffer Wardell at 7:18 PM 1 comment:

We're reminded almost constantly to treat out bodies right. We're told to exercise so our muscles stay strong, eat healthy foods so our bodies get the vitamins and minerals they need, to protect our skin from the sun and make sure we get regular dental checkups.

When we get sick, injured or just achy, our co-workers tell us to go home and take care of ourselves. Get some medicine. Have someone cook you some chicken soup. Give your body the love and attention it needs to get well again.

Our brains, however, don't get nearly so much love and attention. We're constantly making demands out of the thing, insisting that it perform perfectly at work, remember the kids' schedules when we get home and think up something brilliant for our anniversary. We get mad at it every time it forgets something, and when it feels things we don't want it to we bottle the emotions up and pretend they're not happening. We're expected to be able to work forever, shake off negative feelings, and constantly achieve more.

But it's just as important to take care of our minds as it is our bodies, maybe more so. Our bodies may be what keep us alive, letting us do all those wonderful things like walk, talk and breathe on a regular basis, but the brain is the switchboard that makes it all happen. You wouldn't lovingly take care of a sports car only to mistreat the engine, would you?

What people tend to forget is that our minds are just as fragile and just as prone to injury as our bodies. That organ that allowed Beethoven to write symphonies that outlasted him my centuries, or Einstein to discover things about the universe that no one had ever imagined before, is just a small, wrinkled organ that's so complex internally that scientists are only beginning to understand it. If something as relatively simple as an arm or a leg can get damaged so many ways, imagine the trouble that the brain can get in to.

But we shouldn't be ashamed of our brains for getting tired, or even breaking, any more than we are when our muscles and bones do the same thing. We should learn to accept its frailties the same way we accept that we'll never be a size six, no matter how many diets we go on, or that we'll never run as fast an as Olympic sprinter no matter how hard we train. Sometimes we get a cold, no matter how hard we try to protect ourselves from germs, and sometimes we feel sad for no reason we can explain.

Once we can accept that our brains aren't perfect, then maybe we can start learning to take care of them as well as we do our bodies. Addiction can have as many effects on the mind as it does the body, and seeking treatment can improve your life on more than just a physical level. Taking breaks, and not being quite so hard on yourself, can help lower potentially damaging stress levels. Seeking treatment for depression can help you reclaim the life you no longer feel like you have the energy to maintain.

It's normal to take vitamins to improve our bodies, or medicine when we're sick and need to feel well again. It's normal to pamper aching muscles for a little while, giving them the chance to heal. We need to learn to treat our brains the same way.

Posted by Jenniffer Wardell at 7:12 PM No comments: