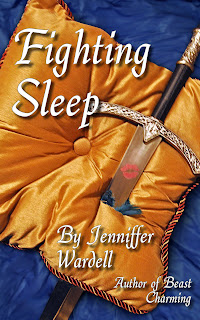 "Fighting Sleep" is now available for purchase! I'm really, really proud of the revisions and the new feel of the book (which was once known as "Dreamless"), and I'm super excited for everyone to get a chance to read it.

After years of trying to find a cure, Princess Elena feels like she's made her peace with the century-long nap in her future. But when the curse threatens to come early and a rogue prince wants to hurry it along even faster, circumstances force her to reunite with a frustrating figure from her childhood who has some secrets of his own. Can the two overcome their differences and work together to defeat the curse, stop the prince, and find their own happily-ever-after?

(This is a new, heavily revised edition of the now no longer in print "Dreamless." If you enjoy the book, please leave a review at the listing of your choice.)

Links:
Amazon
Smashwords
Kobo
iTunes
Posted by Jenniffer Wardell at 9:36 AM No comments:

Read the first chapter of "Fighting Sleep"! (the rewritten edition of "Dreamless")

So I've been kind of M.I.A for awhile because I've been deep in the "Dreamless" rewrite (which will be called "Fighting Sleep" now), but I'm only a few chapters away from the end. I'm really, really excited by this new version (I think I'm writing it so fast because it's the only way I'll actually get to read the thing), so even though I'm not done yet here's the new first chapter: