Parts 1 and 2 can be found here 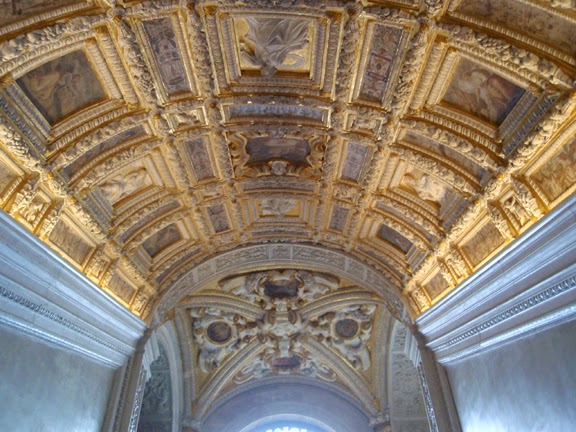 Unsurprisingly, our first "secret princess" class looked a lot like those special seminars where you're supposed to learn the secret of success for three easy payments of $49.99.

"The only thing that's missing are smiling minions with name tags," I muttered under my breath, making a mental note that folding chairs were no more attractive or comfortable-looking in a fantasy world than they were in mine.

"You're letting your sarcastic internal monologue leak out again," Hortensia whispered, keeping an eye on Mother Gans as she poked me in the leg. Kate had taken over the job of drawing her attention, but the pig was right – I had to be more careful. "You have a point, though – this crowd is too well-behaved for there not to be minions lurking around somewhere."

Magical minions, probably, and the sudden thought made my stomach twist. I scanned the crowd again, hunting for any sign that someone was here who didn't want to be, but no matter where I looked there were only bright, shining faces. There was some whispering, but the women looked too excited to be plotting escape.

There was only one explanation.

She started backing up, her steps slow enough I wasn't sure she was consciously doing it, and I caught her arm before she could get very far and leaned in close to whisper into her ear. "They're probably not dosing everyone, or they'd be doing it at the door and we'd already be feeling it. That means they're likely targeting troublemakers. If we smile, play nice, and don't take anything they hand out, we should be fine."

"Unless it's in the food," Hortensia whispered back.

"Well, then we'll... we'll...." See, this is why I liked writing the action instead of living it. I was much better at coming up with clever plans when I had some thinking time and a backspace key. "You're just a ray of sunshine, aren't—"

"You were just telling me about that, weren't you, Jenniffer?"

I shot upright at Kate's suddenly loud question-slash-warning, pasting a bright smile on my face. "Sure!" Deciding that was a little too psychotically cheerful, I dialed it down a notch. "We're really excited."

The small headshake from Kate made it clear I hadn't guessed quite right, but it was close enough that Mother Gans only hesitated a moment before smiling again. "Of course you are, my dears." She ushered us toward the seats. "Now, if you'll just sit down, we can get started. I can get someone to—"

"Oh, there's no need to go to the trouble," Kate cut in, using a smooth, persuasive voice that she must have once used during her old happily-ever-after sales pitches. "I'm sure we can find an open spot somewhere."

We hurried to the chairs, tugging each other into position as Mother Gans headed to the stage at the front of the room. As the music started, Kate leaned over and whispered in my ear. "I think the seating attendants are holding small misters."

As a former Fairy Godmother, Kate has more experience with mind control potions than the rest of us. "Any chance there's a cure like there was for True Love?" I whispered back. I'd have made sure there was, if I'd been the one writing this, but since I wasn't at my keyboard there was no way to be sure.

Kate shrugged. "I don't know. Given the way she was smiling, Mother Gans might actually be spraying herself."

Onstage, she'd started into the pitch, a magic mirror projecting a fake ballroom onto the walls behind her. "...want to shift the nature of what is possible for each and every one of you. In your old lives you were forgotten – shopkeepers, scullery maids – passed over every day by dozens of people who saw you as boring. Ordinary. But I'm here to tell you that each and every one of you are special. You are...." She paused for emphasis as her hands lifted, the music providing the appropriate dramatic accompaniment. "Secret princesses!"

Wild applause erupted, which we joined an instant later. Tuning the sales pitch out, I studied the seating attendants who were positioned in the aisles. They were all average-looking women, clearly no warriors among them, and the fact that they needed the potions hopefully meant they weren't witches or sorceresses themselves. If it was anything like True Love, we'd be fine as long as we stayed out of spraying range, though that would eliminate any chance of being able to steal one for ourselves.

Which, now that I thought about it, might be the best idea. If the crowd was any indication, a good spritz of the stuff made you super compliant. If we gave them a dose of potion directly to the face, it was possible we could get a minion to actually lead us out of here....

"...deserve more than to be a bit player in someone else's story, appearing only in a few crowd scenes to fill out the background. You're all meant to be the heroine of your very own tales, sweeping princes off their feet with your beauty, charm and goodness. Who knows, maybe you all are lost princesses, trapped in the wrong life through a cruel twist of fate with no memory of the glory that you've lost."

The crowd cheered again, even more loudly than before, and out of the corner of my eye I could see at least one woman with tears streaming down her face. Next to me, Kate looked alarmed. "At first I thought she was trying to start the Fairy Godmothers, Inc. racket up again, but the truth is that she sounds more like you."

I just stared her, horrified by the thought. "Take that back."

She looked almost guilty, which only made things worse. "I'm sorry, but it's true. The whole 'everyone deserves their own story' thing? You were talking about almost exactly that last night."

Worried now, I paid more attention to what Mother Gans was saying. "The only thing holding you back is the tools needed to become the heroine of the story. The way to dress and the things to say that lets the story know that you are the one it should be paying attention to. The one who the prince adores, who always knows the right thing to say and just how to solve the problem. The one everyone listens to." She threw her hands up in the air, face once again alight with the crazy. "We will make the world beautiful with your stories, and when we're done no one will ever ignore us again?"

On my other side, Hortensia leaned in close. "Is it just me," she whispered, "or does this sound suspiciously like some kind of hostile takeover?"

I sighed, squeezing my eyes shut for a second. Only I would be dumb enough to create a reality where Mother Goose would get a taste for world domination. "It's not just you." I hesitated, thinking. "Are you okay here alone for a little while?"

She looked around, then nodded. "Don't be gone long, though."

"I won't." Then I leaned over to Kate. "We need to get outside. Follow my lead." I doubled over, clutching my stomach, then hobbled my way over to the aisle. Kate stayed next to me, a hand on her back and a concerned look on her face.

We'd barely left the row of chairs when one of the seating attendants moved to intercept us, hand slightly raised, and I kept an eye on the bottle while Kate spoke. "I'm sorry, but my friend is nauseous from something she ate before we arrived here, and we don't want to interrupt the beautiful presentation. Where are the bathrooms?"

The woman hesitated, hand half raised, and I lurched forward with a gagging noise. She jerked back, clearly afraid of being in target range, then waved us both to the exit. We hurried out, straightening only when the doors had swung shut behind us.

"This will go faster if we split up," Kate said. "One of us can check the perimeter while the other looks for our things."

I shook my head. "It also increases the chance of one us being caught and conveniently used as a hostage during a key narrative moment." I tried not to think or Hortensia, knowing that I'd left her in exactly that position. "Come on. Let's go look for your magic mirrors."
Posted by Jenniffer Wardell at 2:15 PM No comments: