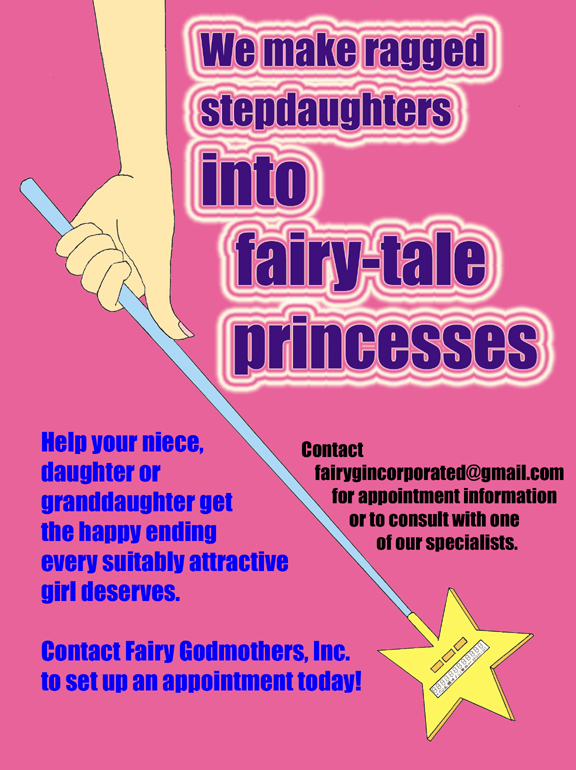 Posted by Jenniffer Wardell at 8:44 PM No comments: 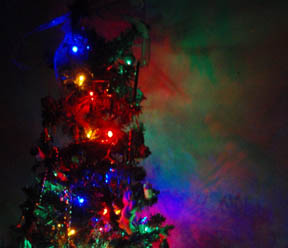 
It was always best to stomp your snow boots clean before breaking into a client’s house for the big reveal. Kate was sure management wouldn’t approve of Fairy Godmothers wearing snow boots at all, but they weren’t the ones having to trudge through foot-high snow drifts. What they didn’t know would keep Kate’s feet warm.


She’d already figured out where the kitchen was, so her next step was to transport herself inside. Once the glow from the magic disappeared, Kate scanned the room for her client. It was the usual wicked stepmother fostering situation, so odds were the girl would be curled up by the fireplace….


There was no girl. Instead, there was an older man in a red, fur-trimmed outfit that was about a century or so out of fashion. He had a bulging bag slung over his shoulder, a hat with a puffball on the end, and he looked desperately lost.


Which was good, because he had definitely not been mentioned in the file. “Sir?” she said carefully, trying to figure out if he had a weapon on him anywhere. Sure, he looked harmless, but there were plenty of people who used that as camouflage. “I’m sorry, but you really don’t look like you’re where you want to be.”


“I don’t think I am.” The man’s voice was so warm and friendly that Kate immediately suspected he was a sorcerer of some kind. No one sounded like that naturally. “I’ve been to five houses now, and there hasn’t been a single Christmas tree, set of wooden shoes, menorah, or any other signs people use to celebrate the season.”


Kate’s brow furrowed in confusion. “I’ve never heard of Christmas trees or menorahs, and the only people I’ve ever heard of who wear wooden shoes are a few of the older fairies.”


“Fairies?” Now the man looked alarmed. “Those wings aren’t just a costume, are they?”


“Nooo.” Maybe he was getting senile. His family or assistants should really be keeping better track of him – magic could be dangerous even in full possession of their faculties – but it wasn’t his fault. Maybe she could help him get home after she’d finished with the initial client meeting. “Why don’t you sit down for a little while. I need to talk to someone who lives here, but then after that I can help get you where you’re supposed to be.”


“That’s a kind thought, but I have far too many things to do tonight.” Reaching into his pocket, the man pulled out what appeared to be a crystal ball swirling with snow. He held it up to the moonlight to peer inside it, flicking a finger against the side. Immediately, it turned the deep black of the night sky, strange lights swirling inside.


After a moment of studying it, he sighed. “I knew I should have taken a left turn at the Andromeda Galaxy.”


Yep, definitely senile. She couldn’t let this man go out wandering on his own, for his sake if nothing else. “Sir, I understand about being busy, but maybe I can help you with that, too.” Kate stepped towards him. “If you could just wait a few minutes….”


“No need, my dear. It was so much simpler with the sleigh, but I’ll get the hang of this yet.” Putting the crystal back in his pocket, he slung the bag around so he could reach inside. “Now, I may be in the wrong universe, but you are definitely on the nice list. And I can’t leave anyone on the nice list empty handed.”


“That’s very sweet, but I really don’t need anything.” Sorcerers, especially crazy ones, tended to have a … strange view of appropriate presents. “Let’s just….”


“Ah, here it is.” With a satisfied expression, the man pulled a small, wrapped present out of the bag. The paper appeared to be covered in pine trees with little stars on top, and when she looked closely her name was on the gift tag.


Surprised, she looked up at him. Most sorcerers couldn’t read minds, and she’d taken over Daisy’s client when the other woman had gone home sick with the Giant Flu. No one was supposed to know she was here. “How do you know my name?”


The man’s eyes twinkled. “Christmas magic, my dear.” Then he laid a finger against the side of his nose, winked at her, and promptly disappeared.


Kate stayed where she was for a moment, staring at the space he’d been. She still didn’t know what this “Christmas” thing was he kept talking about, but she was definitely going to check news reports for the next few days.
Posted by Jenniffer Wardell at 7:16 PM No comments:


Shoemaker Elves were a completely different species than their taller, more elegant cousins. It was never a good idea to confuse the two, particularly within earshot of a representative of either species who had been drinking heavily. Shoemaker Elves were actually more closely related to fairies, and sorting out who had started calling them elves usually took a good working knowledge of linguistic history and the willingness to tolerate a lot of shouting.


Neither species tended to show up in the Fairy Godmothers, Inc. offices, generally preferring to sort out romantic matters among themselves. This news had no effect on the young Shoemaker Elf sitting on the other side of Kate’s desk, her traditional blue cap clutched to her chest. “I know, ma’am. It’s also not very normal to have clients pay you for themselves. But I’m desperate.”


Kate leaned forward, eyeing the girl carefully. “But you don’t want one of the packages we have available.”


“No. I want you to come to my mother’s party and whisk me away to dental school.” She smiled hopefully. “It’s the only way they’ll let me go.”


“What I’m confused about is why the say-so of a Fairy Godmother would help the situation any.” She noticed the girl’s hunched shoulders, a very unusual gesture for a Shoemaker Elf. When you were short, you generally held on to every inch of height you could get. “I would think Shoemaker Elf parents would approve of dental school. Working on teeth has the same kind of craftsman spirit.”


“Well….” Clearly, the girl hadn’t thought her story through as well as she should have. “They’re very traditional, and though they’ll look at me kind of funny a Fairy Godmother will cause just the right amount of fuss. They’ll have to let me go, because making that kind of scene and then not doing anything about it will just make people talk more….”


“And finding out that their Elven daughter is pretending to be a Shoemaker Elf won’t cause enough fuss?”


The girl sighed. “I’m sorry, but people get so disappointed because I’m really bad at the whole snooty Elf thing. I thought you’d like me better if I seemed like I whistled while I worked.”


“That’s dwarves, kiddo, but it’d probably be a good idea not to mention that particular stereotype to any of them.” Taking pity on her, Kate pulled out a new client form. “And I’m fine with however you want to dress. But if you go around in that outfit, people are going to start asking you to fix things.”


As if conjured, one of Kate’s co-workers chose that moment to pop her head around a corner. “Hey, are you a Shoemaker Elf? I have this desk chair I’d really like you to look at….”
Posted by Jenniffer Wardell at 5:56 PM 1 comment:

So You Want To Rule The World: The Hiring Process


The Hiring Process, or Torture is Optional

Admittedly, going through the HR process is one of the less entertaining parts of beginning one’s evil empire. Some supervillains may be able to gather people around them just on the basis of their charm and savoire-faire. However, it would be wisest to assume that this is not the case for you. Not to be rude about it or anything, but the results of such an assumption about one's self can produce some downright embarrassing results, such as big muscular men laughing at you and slapping you around like a girl. Also, the few, blessed individuals that such an approach does work for are generally to smart to assume such a thing anyway.

Simply conscripting people and forcing them to work for you is also an option, but it is a general rule that anyone makes a better employee if they are being paid. The better you want the employee to be, the more money you should pay them. This of course, doesn't count in cases of brainwashing, but it's not very cost or energy effective to use the practice on a large group of people.

Also, when someone breaks out of brainwashing, they are left with a most distressing urge to kill you, along with any employees you have tried to avoid paying. So hiring them is simply smarter.

In this economy, even a supervillain with very little mayhem to his or her name should have a relatively easy time hiring goons, technical staff, or any other employees needed in your world domination plans. Though you should  be able to access even the most legitimate employee sites, Craigslist may help you find the sort of employees that will be more comfortable with the basic requirements of lawbreaking.

True, this method won’t exactly find you the cream of the crop, but that can be solved by having the candidates meet you at an abandoned office building and having them undergo whatever tests you might find necessary (tell the rejected ones that you were casting for a reality show, and you won’t have to kill them to keep them from talking to the authorities). If they start asking about benefits, tell them you’re a start-up that is currently hiring employees only on a contract basis. Benefits, naturally, are dependent on company successes.

Note: Competitive reality shows, particularly ones such as "Survivor," may also be an interesting location to seek future employees. Though winners should be avoided - they already have money, and will have the kind of egos you don't want in underlings - those the winner has manipulated should be perfect for your purposes. This is especially true if they're muscular and not terribly bright.
Posted by Jenniffer Wardell at 9:31 PM No comments: