Friday Chat: Lehua Parker, author of "One Shark, No Swim."

Today we welcome Lehua Parker, author of the exciting Niuhi Shark Saga. The latest book in the series, “One Shark, No Swim,” continues the adventures of a young man named Zader and his mysterious connection to the water. Lehua sits down with me to talk about her new book, which is out now.
How is Zader different than the last time we saw him in One Boy, No Water, the first book in the Niuhi Shark Saga?
After his experience standing in seawater during the fight and after what he sees when Leia dives into the ocean at the end of One Boy, No Water, Zader begins to question things he always took for granted. He begins to test Uncle Kahana, and when Uncle Kahana isn’t forthcoming, Zader starts to hide things he’s feeling and doing. In One Shark, No Swim Zader is restless, more aggressive, and hungry like a shark.
Have you found it’s easier or more challenging to get deeper into the series? Why?
In my head, the whole series is one long story. Book 1 introduced all the characters and explained how things began. Now that the readers are on board, we’re paddling out into the deep water of how things change. It’s a lot more fun to write.
Do you feel any differently about Zader’s world now that you’ve had more experience with it? Have you discovered more about it? 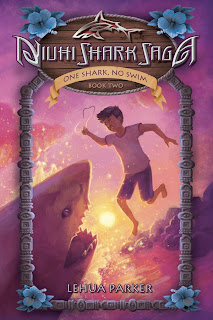 Zader’s world is part of a larger writing universe I think of as Lauele Town. There are other stories about characters we’ve met in the Niuhi Shark Saga that I’d like to write one day. Most of them are not for MG/YA readers. When I write a novel, I have the major beats in my head, but nothing remotely like a detailed outline. At the computer I think, “Okay. In this next scene Zader needs to meet his art teacher. What’s he doing?” And like magic I see the scene unfold with Zader walking up to the beach pavilion where Char Siu and some girls are mimicking the newest dance craze. And then Zader says he hates K-Pop. Those kinds of discoveries keep me writing.
What are the challenges of writing for a MG/YA audience?
Through the series I’ve realized that for my audience a lot of the tension and conflict that I felt was in the story wasn’t on the page yet. Middle grade readers are just beginning to understand symbolism, metaphor, and allegory. They don’t make connections between things that older, more experienced readers do. I’ve learned to write in neon and hold up big signs saying, “Pay attention to this. You may be quizzed on it later.”
The new book, One Shark, No Swim, has less Hawaiian Pidgin English in it than the first edition of One Boy, No Water, which is also being released in a second edition with less Pidgin. How did that decision come about?
There were a couple of assumptions in my marketing plan that didn’t work out the way I planned.
I had the idea that the series would gain readers in Hawaii first, then move across the Pacific to California, Nevada, Washington, Utah—places where a lot of ex-pat islanders live. If I lived in Hawaii or had gone with an islander publisher, this probably would’ve been the way it worked. But living in Utah with a publisher based in Utah as well, it was tough to get books on Hawaiian bookstore shelves. With middle grade readers and their parents it’s all about being able to pick up a book before buying it. I learned eBook services aren’t the best distribution system for an audience without smart phones, iPads, or Kindles yet.
When I first conceived of the series, I wanted to write books that I would’ve loved as a kid growing up in Hawaii. In literature, there are almost no characters that looked, talked, and acted like the people I knew. I also wanted to write something that would appeal to island boys who didn’t like reading. I chose to write a lot of the dialogue in a kind of Pidgin-lite thinking non-native speakers could still follow the action and that islanders would automatically switch Anglicized words to their proper Pidgin ones.
Adult readers have no problem getting into the Pidgin groove. New or reluctant readers—the very audience I was aiming for—struggle with what looks like broken English to them. Mainland schools throw their hands up. They like it, but don’t know what to do with it. So I basically had a series written using unconventional language for an audience that didn’t read books and a distribution system that couldn’t get it in their hands—even if they decided to look.
Something had to change.
That’s when I realized the series needed a Pidgin-ectomy and wrote One Shark, No Swim with far less Pidgin and Hawaiian words. It needed to appeal to readers who liked to read first and island kids second. When I was writing One Shark, No Swim I approached  Jolly Fish Press with the idea of doing a second edition of One Boy, No Water. When JFP inked a new distribution deal with IPG, they came back and said the time was right. Since all of their titles would have to be re-formatted, it made sense to do the second edition now.
What’s next for Zader and his ‘ohana?
In book 3, tentatively titled One Fight, No Fist, Zader’s human world begins to collapse. He meets his sister and biological mother and begins to understand what’s at risk and why he was hidden with his adopted family. Readers will get to know the Niuhi side of the story.
If you could say one thing to everyone who picks up one of the books in the Niuhi Shark Saga, what would it be?


Thank you! Mahalo for picking it up. Between the covers you’ll find adventure, a loving and supportive family, danger, excitement, and all the trials and tribulations of growing up different. You’ll meet Zader, a boy who’s allergic to water, see how islanders live, and maybe take a little piece of Hawaii home with you.

Lehua Parker is originally from Hawaii and a graduate of The Kamehameha Schools and Brigham Young University. In addition to writing award-winning short fiction, poetry, and plays, she is the author of the Pacific literature MG/YA series the Niuhi Shark Saga published by Jolly Fish Press. One Boy, No Water and One Shark, No Swim are available now. Book 3, One Fight, No Fist will be published in 2014.
So far Lehua has been a live television director, a school teacher, a courseware manager, an instructional designer, a sports coach, a theater critic, a SCUBA instructor, a playwright, a web designer, a book editor, a mother, and a wife. She currently lives in Utah with her husband, two children, three cats, two dogs, six horses, and assorted chickens. During the snowy Utah winters she dreams about the beach.

One Boy, No Water

11 year old Alexander Kaonakai Westin—Zader for short—is allergic to water. One drop on his skin sears like white-hot lava. Too bad a lifetime of carrying an umbrella and staying away from the beach isn’t the answer, especially when his popular almost twin brother Jay looks destined to become the next Hawaiian surfing sensation.
But avoiding water is just the tip of Zader’s troubles. Eating raw seafood and rare meat gives him strange dreams about a young girl in a red cape and nightmares about a man with too many teeth. There’s also the school bullies who want to make Zader their personal punching bag, the pressure of getting into Ridgemont Academy, and the mysterious yearly presents from his birth family that nobody talks about.
It’s enough to drive Zader crazy, especially when he suspects old Uncle Kahana and ‘Ilima know a secret that explains his unusual biological quirks. After all, they were the ones who found him newborn and abandoned on a reef and brought him to the Westins to adopt. Uncle Kahana swears Zader is ‘ohana—family—by blood as well as adoption.  Too bad he’s not saying more.
When Jay quits surfing after a shark scare, Zader decides it’s time to stop hiding in the shadows and start searching for answers.
Growing up adopted in Hawai‘i just got a little weirder.

One Shark, No Swim

There’s something bugging adopted Zader Westin, something more troubling than his water allergies where one drop on his skin burns like hot lava. It’s bigger than his new obsession with knives, designing the new murals for the pavilion with Mr. Halpert, or dealing with Char Siu’s Lauele Girlz scotch tape makeover. Zader can’t stop thinking about a dream, the dream that might not have been a dream where Lē‘ia called him brother then jumped into the ocean and turned into a shark.
Zader’s got a lot of questions, not the least being why he’s hungry all the time, restless at night, and why he feels a constant itch on the back of his neck. It’s making him feel like teri chicken on a pūpū platter, but Zader doesn’t want to think about chicken, not with his growing compulsion to slip it down his throat—raw.
With Jay busy at surf camp and Uncle Kahana pretending nothing’s happening, Zader’s left alone to figure things out, including why someone—something—is stalking him before it’s too late.
Summer in Lauele Town, Hawaii just got a little more interesting.
One Shark, No Swim:
Amazon
http://www.amazon.com/One-Shark-Swim-Lehua-Parker/dp/1939967104/ref=sr_1_1?ie=UTF8&qid=1379752439&sr=8-1&keywords=one+shark+no+swim
Barnes & Noble
http://www.barnesandnoble.com/w/one-shark-no-swim-lehua-parker/1114940697?ean=9781939967107
Goodreads
https://www.goodreads.com/book/show/18114896-one-shark-no-swim

Posted by Jenniffer Wardell at 8:41 AM