Being a teenager is terrifying 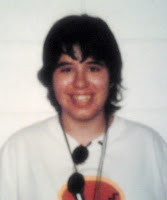 My hands shook all the time when I was a teenager.

It wasn’t because of a medical condition, and I never checked whether I had anything like anxiety disorder. The fine tremble was so familiar to me that I never even thought about it much, and when someone asked I would brush it off with a “oh, they always do that.” Never once did I think about how strange it was, and alarming, that an average day could make my hands do something a human body is only supposed to do at its most frightened or emotional.

The emotion and fear weren’t exactly new to me either, with every day a desperate effort to prove myself to classmates I was certain hated me and a father and grandparents who looked at me and wished for a different girl in my place. It was like every morning was the biggest test of my life, and I was dogged with the constant, terrible feeling I was failing no matter what I did.

Adults forget how terrifying being a teenager can be. It’s like inching slowly out onto an impossibly high diving board for the very first time in your life, Olympic-level judges critiquing your every step and hesitation. People are screaming suggestions and other critiques to you from both the sidelines and the water, along with dire warnings about what will happen if your dive isn’t absolutely perfect. There’s some encouragement, but it either gets lost in the shouting or makes it seem like you’re being a coward for not just jumping in.

When you get in the water, it’s always easier. True, we still have people shouting at us from the sidelines, and sometimes the other swimmers try to drown us, but it feels like there aren’t as many people paying attention. Even more importantly, the water is familiar to us now – even climbing back up and jumping in again isn’t as frightening, because we know what it feels like to fall. We’ve done it before, and we know what to do with our bodies.

If you’re still up on that diving board, it’s okay to be scared. Being young is incredibly overwhelming, and though those of us down below mean well we don’t really understand. Just be as good to yourself as you can be, and know that when you get down to the water you realize that the shouting doesn’t really mean that much. All that really matters is that you get down here without hurting yourself, and figure out how to keep your head above water once you’re here. The rest of it is just noise.

I don’t know when my hands stopped shaking – I only noticed the strange stillness afterward. But whenever something stressful or frightening has happened in the years since, I can’t help but look down at my hands. Surely this is bad enough to make them shake, I always think. Surely what I’m going through has to be scarier than just being a teenager.

But they’ve never shaken since.
Posted by Jenniffer Wardell at 8:05 PM

Email ThisBlogThis!Share to TwitterShare to FacebookShare to Pinterest
Labels: about me, fear, growing up, mind, women