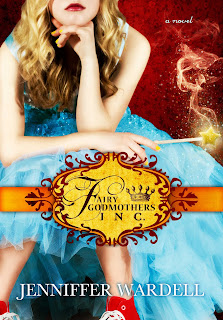 Kate and the client, a shy but perfectly nice young lady named Bonnie, were currently hiding out in the castle corridor trying to figure out what had gone wrong. At the moment, the “figuring” mostly consisted of Bonnie crying and Kate thinking evil thoughts about the young Count Duboir.


“He hates me,” Bonnie whimpered, trying to keep her sobs quiet. “When we started dancing I thought he liked me for a minute, but then he couldn’t get away from me fast enough.”


“That’s because he’s an idiot,” Kate soothed, rubbing a hand along the girl’s back. She’d actually been dumb enough to like the painfully young count for about five minutes. He’d looked incredibly uncomfortable at the party, but when he’d seen Bonnie step out onto the dance floor his whole face had lit up. She didn’t understand why he’d bolted the minute the song ended, which made the whole thing that much more infuriating. “I’ll figure out something.”


“It won’t work.” Bonnie shook her head, her voice wet. “You did everything just right.” She sniffed, sounding absolutely miserable. “It’s all my fault. I should have giggled more or something. But all I could do was stare at him.” That started the tears up again. “He was just so wonderful….”


Oh, the poor girl. “Listen, you’re the wonderful—“ Kate stopped, practically able to feel the pieces clicking into place. “You didn’t talk to him very much, did you? When you were dancing, you didn’t have to, but afterward you’re expected to stare at each other and say all kinds of romantic nonsense.”

“I was hoping he wouldn’t notice when I didn’t say much.” Wiping at her wet cheeks, Bonnie watched Kate stand up with a confused look. “Is that what I did wrong?”


“You did nothing wrong,” Kate said firmly, helping Bonnie to her feet. “The count is just as shy as you are, and after the dance was over he panicked.”


Bonnie just stared at her. “How do you know?”


“I don’t, but any other explanation means I have to kill him.” Kate dragged Bonnie back toward the ballroom, stopping just outside the doors. “Is there any chance at all you might be willing to start a conversation with the man?”


Bonnie looked panicked. “What would I say? I don’t know enough to sound interesting!”

Kate sighed. “Okay, option two.” She watched the pages run back and forth between the kitchen and ballroom, then snagged a dish of custard off of one of the trays. Watching the crowd until the count came into view again, she dumped the custard over Bonnie’s head.


The girl looked like she was about to cry again. “I really liked this dress.”


“Yes, but now the count has a reason to talk to you,” Kate said, pushing Bonnie through the door. The girl just stood there a moment, looking miserable, but when the count saw her a look of instant dismay crossed his face.


Immediately, he pushed his way to her side. “Are you all right?” he asked Bonnie, taking her hands in his. When the girl just shook her head, still sniffling, the count led her out the door. “Come on. Let’s get you cleaned up.”


Hiding safely around a different corner, Kate grinned
Posted by Jenniffer Wardell at 8:25 AM