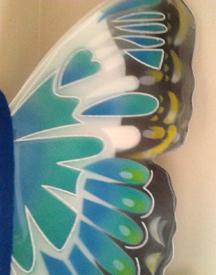 My new book, “Fairy Godmothers, Inc.,” is being published in late April 2013 by Jolly Fish Press. http://www.amazon.com/Jenniffer-Wardell/e/B005RREFUM The wonderful people at Jolly Fish are putting together an official site for the book now, but the members of The Next Big Thing blog hop are giving me a chance to give you guys an early introduction to the book.
The Next Big Thing: Fairy Godmothers, Inc.

Where did the idea come from for the book?
I’ve always wondered why fairy godmothers go around sneaking poor girls into fancy dress balls. The only answer that made any sense was that they must be paid for it.

What genre does your book fall under?
Fantasy/humor/romance. Yes, I know there’s no section in bookstores for that, but why limit yourself?

Which actors would you choose to play your characters in a movie rendition?
My publisher, Christopher Loke, mentioned Emma Stone for Kate. Kate was flattered by the comparison, naturally, but is sure she’s nowhere near as pretty as Emma.

What is the one-sentence synopsis of your book?
Kate, an employee of Fairy Godmothers, Inc., falls in love and saves the day in the middle of her most complicated assignment yet.
How long did it take you to write the first draft of your manuscript?
The first draft was so long ago I genuinely don’t remember. Let’s just say that Kate and I have known each other for a very long time and leave it at that.

What other books would you compare this story to within your genre?
All fantasy humorists dream of one day being compared to Terry Pratchett. People who have read early drafts have also compared to Mercedes Lackey’s 500 Kingdoms books and Patricia C. Wrede’s Enchanted Forest Chronicles.

Who or What inspired you to write this book?
I love fairy tales, but the heroines were always so good and beautiful that I kind of wanted to smack them with something. What about the witty, sarcastic girls? What about the girls who no one notices? What about the girls who have never really fit in anywhere? I wanted THOSE fairy tales.
What else about your book might pique the reader’s interest?
“Fairy Godmothers, Inc.” is what happens when fairy tales and reality collide.
Thanks everyone! You can also check out other blogs in the blog hop, including our useful, interesting and funny home base, Slow Stir: http://shaundawenger.blogspot.com/ Jolly Fish can be found at http://jollyfishpress.com/

Posted by Jenniffer Wardell at 8:11 AM